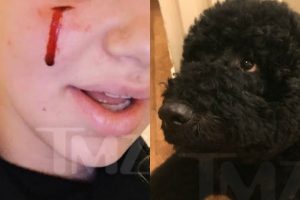 At our dog training facility in Northern Virginia, we do dog reactivity training; however, it appears it’s needed in the White House!

TMZ has recently posted a photo of a nasty cut under a young woman’s eye, allegedly the result of being bitten by the Obama’s family dog, Sunny.

The 18-year-old visitor is a family friend of the Obama’s and was being given a tour of 1600 Pennsylvania Avenue when she encountered Sunny. The girl went to give the the 4-year-old Portuguese water dog a hug,  when, for some reason still unknown, Sunny bit her on the cheek, just under her eye. This is another good reminder of why you shouldn’t hug or try to kiss unknown dogs!

TMZ says that the President’s family doctor looked at the gash that had been made and stitched up the cut. It is nothing serious, but it will leave a scar once the stitches are removed. The girl later posted a picture of her injury on social media.

The White House did not comment on the matter. President Obama has less than a week left in office before the transition of power to President-Elect Donald Trump on January 20.

Sunny, along with Bo, aged 8, have been with the family throughout their time staying at the White House. They are both notable in their pictures for their curly, non-shedding black fur and long tongues, and have been credited for making the breed popular.

If you are having issues like this with your dog, contact an Off Leash K9 Trainer in your area!