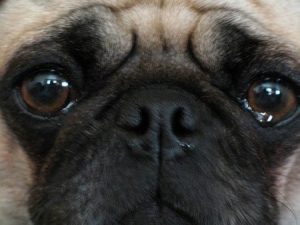 At our dog training business in Northern Virginia, we always get asked about dogs’ emotions.

Dog owners everywhere have been asking this question for years when looking at their furry friend: “What is he thinking about?”

Recently, two studies have shown that a concrete answer to that question may be possible.

A study conducted by the director of the Emory Center for Neuropolicy, Gregory S. Berns, may be able to provide tangible evidence regarding what a dog is feeling. After hearing the incredible story of the Navy dog that assisted in taking down Osama bin Laden, Berns was moved to see what was happening inside the canine mind. The dog was trained to not only endure rough conditions, but to enjoy working in them.

Berns chose fMRI to be the tool he used to look into the minds of dogs and see what they were thinking. With a dog trainer and an assistant by his side, Berns spent a year preparing the dogs to withstand the fMRI machine.

fMRI machines are fairly loud, so the dogs were trained to wear ear plugs during the procedure and to ensure the dogs remained safe in the machine, he also trained them to lie perfectly still as the scan was done. If the dogs were not still, the image would be ruined.

Berns’ study was successful and he was able to capture images of the dogs’ brains. When the dogs were shown a hand signal indicating they would get a treat, the reward center of their brains were activated and lit up on the image. That was not a surprise to Berns. However, he also discovered that dogs’ brains are considerably more responsive when the signal came from a human, and not an inanimate object.

Using the fMRI to map a dog’s brain will be able to answer the question of whether dogs can feel empathy or not in the future.

Across the pond, Deborah Custance and Jennifer Mayer, researchers out of London’s Goldsmiths College, began their journey to figure out if dogs are able to feel empathy – the ability to share and understand another’s emotions.

Custance mentioned that she has talked to a number of people who claim that their dogs try to comfort them in their times of need. Her own dog, Custance continues, has never offered her comfort. Even with her own dog not expressing these characteristics, Custance wanted to study whether or not dogs were truly able to care about their owners in the way we think they do.

To conduct their research, Mayer and Custance put together a group of largely untrained dogs. The group was mostly mixed breeds and contained an equally number of male and female pets. A scenario was set up where a stranger to the dog and the dog’s owner would alternately cry, hum in an unusual way, or talk. The dogs’ reactions were observed.

15 of the 18 dogs that participated in the study, sought out whichever person was showing signs of distress; it did not matter if the person was a stranger or not. Custance said it seemed as though the dogs were capable of showing empathy because they did not go to their owners to be comforted themselves. However, the study does raise more questions: Do dogs respond to anger or pleasure the same way they responded to distress? If children were included in the study, would the dogs react differently?

Dog lovers everywhere are rejoicing at the results of this study, because, to them, it proves they are more to their dog than the just hand that feeds them. Mayer and Custance have made it clear that there is still more research to be conducted and they aren’t surprised at the public’s reaction. They know that dog owners want to believe this data. However, Custance knows that dogs still have a positive effect on people’s lives.

The question: “Wonder what is he thinking about?” may be answered sooner than you think.