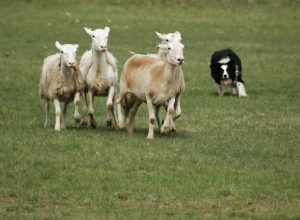 We always get ask if we do shock collar dog training at our location in Northern Virginia.  We do not like the term “shock collar” and in fact, it’s incorrect.  The collars do not “shock” they provide a very low level contraction of the muscle, just like stim pads that physical therapists use.

Many people have their opinions on different training techniques; however, there have actually been numerous studies on on the usage of training collars and their affects (long term and short term).

Two separate studies on dog behavioral coaching techniques and their positive and negative effects was completed in 2001, both under the name Christiansen e-collar et al study (2001). To differentiate the two studies, one was “2001a” and “2001b”.

In the first study, Christiansen e-collar et al study (2001a) the study looked at three separate breeds of dogs when confronted with domestic sheep. The three breeds of dogs included in this study were Elkhounds, hare hunting dogs and English setters. There were a total of 138 dogs observed and tested in this study. There were two separate tests involved in this test study and in both, electronic collars were used to attempt to deter attacks on the domestic sheep. The first test, defined as a path test, involved observing each individuals’ dogs’ reactions. There were obstacles placed in the way of the path to the sheep, this test was designed to determine how a dogs’ behavior changed when attempting to “hunt” the sheep when confronted with a confusing path. The second part of this test was a “free-roaming” exercise. It was a test to determine that dogs’ reaction to the sheep in order to predict hunting motivation and attack severity. The results of the tests showed that younger dogs showed high amounts of hunting motivation and persisted in more frequent attacks on the sheep than did older dogs. Throughout the duration of this test, shocks were administered not to damage the hunting abilities of the dogs but to determine the learning capacity of the dogs when it came to observing their behavior.

The second study, Christiansen e-collar et al study (2001b) retested many of the same tests that were completed in study one, 2001a. The study also used the same dogs as tested before. In the exact same test to study 2011a, the free running dogs were again fitted with the shock collars to deter them once the test dogs came with one or two meters of the sheep. The results that were recorded showed the learning ability of the dogs over time. Dogs who had been shocked previously in the study of 2001a showed an increased hesitance towards hunting the sheep. This result was recorded numerous times in study 2001b. The study was able to conclude that through learned training with the electronic electronic collars, over the course of two years, researchers were able to significantly alter the observed behavioral patterns of the dogs effectively training them to not hunt the sheep without compromising their natural hunting instincts.

An even more important finding from the two 2001 studies was that there were no real documented effects on that of the dogs. While the corrections did cause cortisol level changes in the dogs, over time as the dogs were conditioned, this halted. The study then was able to accurately claim that electronic collar training is an effective and safe method that can be used to train dogs. However, at the conclusion of the study, the researchers do make note that electronic collar training should be done with care and that only trained and skilled professionals should attempt to have such effects on dog behavior and learning techniques.

If you are interested in making your dog amazing, fixing their behavioral issues, and building their confidence, contact Off Leash K9 Training!