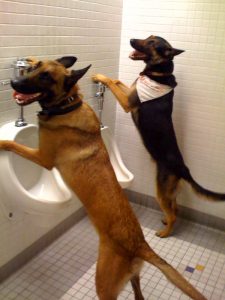 First off, congratulations on your new perfect puppy! Many people do not realize how much work some puppies can be for the first six months of their lives, and that’s just the beginning. As you’ve learned, house breaking a puppy can seem impossible. Essentially, it is like having a newborn baby in many ways as you may have already figured out. Puppies require constant attention and, just like babies, are more than likely waking you up in the middle of the night.

In general, with crate training for your dog, your puppy should be almost completely housebroken by the age of four to five months. This age can vary depending on how effective you are throughout this process. Remember, your dog does not decide how long it takes to be house-trained, you do. We go over this subject daily for our puppy training in Northern Virginia.

You are probably wondering, “Where do I start?” First, get a crate, preferably one with a divider so you can expand the living space for your pup as it grows. It is nearly impossible to house-train a puppy without using a crate. Housebreaking a puppy is based entirely on the crate-training system. Crate training teaches a puppy the crate is its spot to go; it’s the equivalent of its home. More important, it becomes a location to hold your puppy during the housebreaking process when he cannot be directly supervised.

Pick a crate big enough for your dog to lie down, stand up (without his or her back touching the top of the cage), and spin around in a circle. Do not put a small puppy inside a large crate. They should have not have much more room than described above. I always recommend getting a large crate that has the adjustable divider in it. This way, you only need to buy one crate and can adjust the space as your puppy grows. If you find your puppy is going to the restroom inside the crate, you may want to reduce the size of the space. Often, if the crate is too large in relation to the size of your puppy, he does not have a problem going in the back corner of the crate because he can get far enough away from the mess that it doesn’t affect him as much.

Your puppy should be in its crate a lot for the first couple of months it is home with you. Don’t feel bad about keeping him in the crate. To put it into perspective, a crib is simply a crate for babies. You put babies in their cribs to protect them from themselves. A puppy should be looked at the same way.

Using a keyword phrase during housebreaking is very important. From the first day you get your puppy, start to implement a keyword while your puppy is going to the restroom outside. Most people prefer the phrase “go potty.” So any time your pup is sniffing in the grass when you take him outside, repeat the key phrase “go potty.” As soon as your pup uses the restroom, immediately praise him (verbally, physically, and/or with a treat). Over time, he will associate the key phrase “go potty” with the act of going to the restroom, about a month into the housebreaking process. After this period, if you see your pup start to display that he is going to go to the restroom in the house (tail up, sniffing around in circles, etc.), repeat that phrase he has been hearing from day one, “Do you have to go potty?” He will recognize that key phrase he has associated with going outside and will run to the door, indicating that he does indeed have to go out. This is the first step of progress for housebreaking.

Use a bell on a string to teach your puppy to let you know that he has to go outside. Tie a bell to the end of a string and hang it from the doorknob at approximately your pup’s chest level. Every time you take your pup outside, ring the bell with his paw. Praise him immediately and open the door. Doing this every time you go out teaches the dog that ringing the bell equals the door opening. Over a period of time, your pup will learn: “If I have to go outside to the restroom, I ring bell and the door opens.”

The most important thing to effectively housebreak your puppy is total supervision. I will state it again, because it is that important: total supervision..What does that mean? Simple; it means if your puppy is not inside its crate, you or another member of the household should be directly supervising him. Until the pup is completely housebroken, there should never come a time when he is in a room alone. To put it into perspective, if you are downstairs with your puppy and decide to take a shower, even if it is just five minutes, put your pup inside its crate. Again, think of your pup as a baby. If you have a baby and you are going to jump in the shower or leave the room to fold laundry, would you leave a baby just sitting in the living room by itself? No, you would put it in the crib. Again, a crib is simply a crate for babies. When doing our puppy training in Northern Virginia, we generally realize this is people’s biggest mistake, lack of supervision.

If, while supervising your pup, you see him squat and start peeing or pooping, immediately give a loud verbal, “No!” Pick him up, immediately take him outside, and set him down in the yard. Then repeat that key phrase, “Go potty.” As soon as he finishes, give praise (verbal, physical, and/or a treat) and take him back inside. There should never be any punishment involved. Rubbing his nose in it, hitting him, rolling a newspaper—these are all things that are proven ineffective. More important, it just breaks down the bond between you and your pup. Physically punishing a puppy for going to the restroom in the house is like spanking a one-year-old for going in their diaper.

Many people ask, “What if I didn’t catch him in the act, but noticed he went to the restroom in the house?” Very simple, do absolutely nothing. That’s right, do absolutely nothing. Write it off as a failure on your part, clean it up, and move on. Again, do not punish the puppy. You failed him, he did not fail you. You violated the biggest rule in housebreaking: You failed to give him total supervision. This is so important it is worth mentioning once more: If you do not physically catch your dog in the act, chalk it up to a loss on your behalf and move on. Make it your goal to catch him every single time. For every time your pup goes in the house without being caught in the act, you add a few more days to the housebreaking process. So, if he is going in the house a couple times per day without getting caught in the act, the housebreaking process can be really prolonged.

We recommend that you do not put padding in the crate until the pup is housebroken and more mature. We stress this point daily at our dog training in Northern Virginia, Off-Leash K9 Training. We feel this is important for a couple of reasons. Most important, if you are gone, your puppy will more than likely chew, shred, or eat this padding/bedding at some point, which can become a choking hazard for a small puppy. Additionally, often puppies who have padding in the crate will still urinate in their crate because the padding acts as a sponge and absorbs the urine. Therefore, it does not bother them to urinate there; the padding acts as a diaper.

Another important thing to remember is to never let your dog out of the crate if he is actively barking or whining. This will teach your dog that if he barks and whines long enough, you will let him out. It is like the child who throws a fit in the middle of the toy store, and then the parents buy the kid a toy. The child simply learns that if he makes a big enough scene, he will get his way. Dogs learn the same way. So never let your dog out of the crate if he is actively barking or whining. Doing so rewards bad behavior. Your pup should learn that he gets out of the crate only when he is quiet. Just to clarify, your new puppy may whine in the middle of the night to let you know he has to go out. It is then acceptable to let him out of the crate, take him outside, use the key phrase, then come back in. However, once your puppy is old enough to hold it throughout the night (generally around three to four months of age), never let him out based on whining or barking.
During the housebreaking process, we usually recommend cutting off food and water around 7 p.m. This is done to ensure that all of the water has passed through the pup’s system by the time you go to sleep (assuming you are going to bed around 9 p.m. or later). If you cut off food and water at around 7 p.m., it will minimize having to go in the middle of the night. Additionally, do not put food or water in the crate with the pup; again, this will cause him to have to go to the restroom in the middle of the night.

Never use the crate as a place to punish your puppy, as hard as it sometimes may be. If you start using the crate as a place of punishment, the pup will start to hate it, will not want to go in, and will no longer see it as its “home.” Rather, he will see at is a prison. The crate should always be looked upon as something positive. The crate should be seen by the dog, as you see your bedroom, as a place to go, get away, and relax. It is also a good practice to feed him in the crate or give him a treat every time he goes in, again, associating it with something positive. When we do our puppy training program in Northern Virginia, we always stress the importance of this.

If you follow all these principles, you should have a very short housebreaking process and a dog that loves going into the crate.