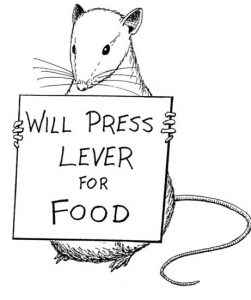 Operant conditioning is, “a type of learning in which the strength of a behavior is modified by its consequences, such as reward or punishment, and the behavior is controlled by antecedents called discriminative stimuli which come to signal those consequences.”

Now, as you can see, this quadrant is broken into two categories which is: reinforcement and punishment.

Let’s break down each one…

Positive Reinforcement:
This is doing things such as marker training with your dog, he gives you a desired behavior (sit, down, heel, place, etc), you immediately give him a desirable reward such as a treat, a ball, a tug or praise. Again, positive, so you are ADDING a reward.

Negative Reinforcement:
This is training such as prong collar or ecollar training. Negative reinforcement means something already present is removed (taken away) as a result of completing a behavior and the behavior that led to this removal will increase in the future because it created a favorable outcome. A good example would be the seat belt in your car, your car “dings” annoyingly until you put it on. So, you generally put it on quickly in order to avoid the nagging. Again, negative, so you are TAKING AWAY the nagging.

Negative Punishment:
This is when you REMOVE a highly desirable stimulus for your dog displaying an unwanted behavior. For example, if you are trying to get your dog to sit or down; however, he is not paying attention, so you take away his ball/tug. An easy example of this would be two siblings get into a fight over who gets the new toy, so the parents simply take the toy away from them. Again, “negative,” so you are REMOVING something (the toy).

A lot of balanced trainers use the entire quadrant in some form or another when training dogs.

If you are interested in having a highly confident, well rounded and amazingly obedient dog, contact Off Leash K9 Training!

See over 1200+ before/after videos on our YouTube Channel:
www.youtube.com/offleashk9training