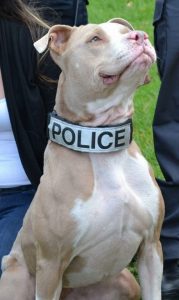 Anyone who has ever watched my Facebook Live videos know that I LOVE Pit bulls and I’m a huge advocate for them, so, I was very excited to see this!

If a survey was given to answer the question of whether or not a Pit bull might make a good police dog, many would surely find it of no surprise that the majority would answer “no.” It’s no secret that a preconceived judgement persists against Pit Bulls and their aggressive natures.

However, the City of Poughkeepsie Police Department, along with a large handful of trainers and rescuers, would beg to differ.

The sweet-hearted cinnamon-colored canine Kiah was taken in by Brad Croft, operations director of UniversalK9, an organization that prides itself on training young dogs and police force members to breed successful relationships and thus develop successful K-9 units. Brad Croft came across Kiah when she was a young, abandoned shelter dog. Though recovering from a skull injury brought on after being hit with a hammer, the sweet and timid nature of of Kiah caught Croft’s attention.

Croft was quoted at the moment of meeting this young pup, describing his incredulity and just how miraculous it was that she had survived the head injury. However, what impressed him even more than her physical resilience was her emotional one. Without fearing that she was holding any sort of grudge, Croft was willing to give it a shot and took in this young pit bull with the intention of training her as a police dog.

Though the start of Kiah’s training was difficult, it became clear rather quickly that that resilience Croft saw before was well-matched with potential. She began to quickly catch on to her training, and by the end of the eighth week, Croft termed her as a “gifted” dog, noticing her fervor and hard-working personality. It was during this time that the City of Poughkeepsie Police Department contacted Croft, asking for a furry addition to their team. Since then, Kiah has kept up the hard work with her team and her partner, Officer Justin Bruzgul, as a detection dog for the narcotics and missing persons department.

This 85-pound friend of the Poughkeepsie P.D. and of Croft has down well and her hard work has paid off. On Thursday, Kiah is scheduled to receive the ASPCA Public Service Award in New York City and will make history as the first ever pit bull police dog to do so.

The ASPCA Public Service Award, according to ASPCA President and CEO Matt Bershadker, will recognize Kiah, as it has with dogs before her, for her heroism and service. In addition to this however, the award will also act as an honor for the individuals, organizations, and teams that have worked for and alongside Kiah and others like her. According to Bershadker, this is an award that highlights the connection that exists between these people and the beloved animals.

Since rescuing Kiah, operations-director Croft has partnered with the Animal Farm Foundation to continue to train and place pit bulls like Kiah into police departments all over the United States. The small step taken for Kiah will continue to make a difference.