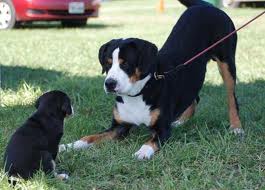 There are a lot of unique behaviors that dogs have that can be difficult for us humans to understand. They do things that you may find disgusting, which are actually completely normal to them. Dogs have no actual language that people can tell so they do heavily rely on their body language to help them get the point across. This is why they bark and paw at you when they want something and why they do the “play bow”. Dogs rely on these cues to help them to communicate with humans and other dogs; therefore it can be helpful to understand just what these motions mean.

The play bow is an invitation from one to another that “I am ready to play, so play with me?” This also lets the other dog know that even though they make act in a way that can be construed as aggressive, they are really just playing and do not have cruel intentions. This is important for humans to observe as well, so that they know the intentions of their dog. Dos are playful creatures and they love to play with pretty much anyone who is willing to play with them.

No matter what they are feeling, dogs need to move. They love to play. In fact, play is crucial to pets because it is what helps a dog with their cognitive development as well as their emotional resiliency. Dogs that are playful are believed to have a higher capacity for adaptability, though this is not a capacity in the cognitive area. There is a lot more to the play bow that you may not know about and there is a bit of a darker side to this adorable pose.

The play bow is believed to have some negative consequences. A dog that asks to play is not being a dominant dog. By going into this position to invitation pose, the dog is putting them in a position that is disadvantageous to the dog. This means that the dogs are really seeking out negative neurochemicals in the brain that causes bad emotions. This can be confusing because why would dogs that love to play and be happy, do something that would give them negative emotions? The only real plausible reasoning for this is that these negative emotions actually feel pleasurable to the dog, which is why they continue to do this behavior. They may actually be taking in the emotional momentum of its playmate.
Dogs may seem like simple creatures that you can just rub their belly and feed them to make them happy. Dogs actually have complex emotions and thought processes that humans just do not fully understand. Their behaviors are actually quite fascinating and are constantly being studies. Even something as seemingly simple as a play bow is actually something far more complex. It is always good to keep an eye out for these behaviors to make sure your dogs are behaving in an appropriate manner so that you can correct them as soon as possible.

If you feel that your dog has an aggression issue in Northern Virginia, contact Off Leash K9 Training!